Like the bison of North America, only remnants of the springbok flourish today in South Africa. Adding to the romance of the Karoo is the aura of millions of springbok that once trekked across the landscape. It wasn’t an annual migration from summer feeding grounds to winter feeding areas like caribou of North America for instance. It was more of a cyclical movement based on population and availability of grazing. Draught was the number one reason for the period treks. But during times of plenty for instance when the Karoo received abnormal amounts of rain producing abundant grasses, springbok had the ability to produce two groups of young within six months. That population explosion put additional strain on the resources.

During these population explosions and/or times of extreme drought, the springbok would begin a movement toward better grazing. As they traveled they encountered other springbok and devoured their grazing and causing them to fall in with a growing number of springbok creating an ever growing herd. Hundreds turned into thousands. Thousands turned into hundreds of thousands and so on. There were reports of herds of such enormity that it would take a week for the springbok to pass. Often they flooded into the streets of towns consuming gardens and flower beds as they went. The landscape they left behind was devastated for that season, until the next rains. Many sheep farmer gave up after a trekbokke crossed his property.

Lawrence Green noted that, “While farmers and trekboers did not always welcome the springbok invasions, they were able to profit or at least balance their losses by taking a heavy toll of the herds. Convoys of wagons, carrying whole families, intercepted the tekbokke, muzzleloaders went into action, and one bullet often killed more than one buck. This was hunting on a gigantic scale, and nowhere else in the world has such slaughter been known. Each family group of hunters would form an old-fashioned laager with the Cape carts and wagons outspanned in the shape of a large horseshoe. Men and boys would ride out to prey on the fringe of the migration. The women would help with the skinning and cutting of biltong.”

Indeed, after a trekbokke passed, homesteads were all festooned with drying strips of biltong. During the 1880 trekbokke one farmer shot 68 springbok standing in one place. Another hunting party of 28 harvested 750 springbok in a single hunt.During the late 19th Century farmers began to put up barbed wire fences to protect their sheep farms to little avail. But as the human population increased, there was a concerted effort to reduce the number of springbok to protect farms, families and livelihoods. As a result of the devastation left by the 1880 trekbokke there was a renewed call for their destruction. Due to fencing and hunting the last great trekbokke was in 1896-1897.

However, springbok are flourishing once again, although they will never achieve the numbers that once covered the veld. Tourism, sport hunting, and declining domestic stock are all contributing to the resurgence of the springbok population. At Jules of the Karoo, for instance, with our enormous 300,000 managed acre farm, we are still able to offer low cost old-fashioned meat hunts as well as reserve other portions of the farm for trophy hunting. As a result we can offer the best of both worlds.

“In dealing with myriads, numbers cease to have any significance. One might as well endeavor to describe the mass of a mile-long sand dune by expressing the sum of its grains in ciphers as to attempt to give numbers of antelope, (springbok), forming the living wave that surged across the desert…”
William Charles Scully, 1892

“I stood upon the forechest of my wagon… I had some difficulty in convincing myself that it was reality which I beheld, and not the wild picture of a hunter’s dream.” Gordon Cumming
After a passing of the trekbokke, author, Lawrence Green described what one family found, “Every donga leading to the river, every little gully was filled with buck. It seemed that the first buck had paused on the brink, considering the prospects of leaping across. Before they could decide, the ruthless mass was upon them. Buck after buck was pushed in the donga, until the hollow was filled and the irresistible horde went on over the bodies.”

“On the failure during drought of the stagnant pools on which the springbok rely, they pour down like the devastating curse of Egypt from their native plains in the interior.”
Major Cornwallis Harris

In 1888 T. B. Davie and his friend Dr. Gibons attempted to count the number of springbok as the sea of springbok overwhelmed them near Prieska. Their unit of measure was a kraal in front of them that could hold fifteen hundred sheep. Dr. Gibbons said, “Well, if fifteen hundred sheep can stand there, then about ten thousand can stand on an acre, and I can see in front of me ten thousand acres covered with buck. That means at least one hundred million buck. Then what about the miles upon miles around on all sides as far as the eye can reach cover with them.”

In 1896 S.C. Cronwright-Scheiner and two farmers that were used to counting stock surveyed the vast plain covered with springbok and using field glasses attempted to make an accurate estimate. They counted by section and estimated 500,000 springbok in sight at that moment. But the herd covered an area 15 miles long and 140 miles long! Cronwright-Schreiner declared, “When one says they were in the millions, it is the literal truth.” 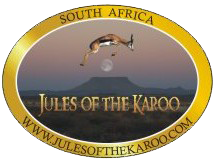